A misconception I often hear is that social media advertising does not work. Yes, you may not get near the amount of hot inbound leads or sales versus pay-per-click ads displayed next to organic search results. However, social media ads are a fantastic and low-cost means to get your content in front of highly important people. Here is how I spent $18.42 on a Twitter ad campaign that resulted in a shout-out at MozCon and an increase of 70+ Twitter followers, after the founder and CEO of SEER Interactive, Wil Reynolds shared my Twitter ID with the 1300+ guests in attendance:

@BenWynkoop1 Hah! Well he just recommended your ID to about 1300 people at the #mozcon conf with huge kudos – so congrats!

How I did it

I wrote a blog titled, “10 Takeaways from Wil Reynolds PR in SEO at SEM San Diego.” This piece was a recap of Wil Reynolds’ presentation at SEM San Diego’s May event, where he spoke on the growing role of PR in SEO.  In addition to a write up I also created several graphics with quotes from his presentation. Humans are visual creatures, so you can’t go wrong in content marketing by creating awesome graphics and videos. Below is a slide from his presentation mentioning that I got his M%$#@(&%in’ attention: 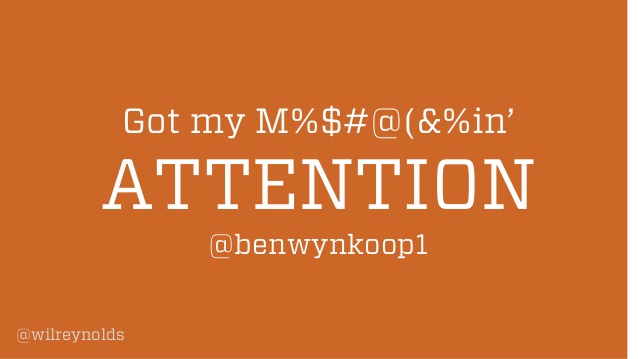 Step 2 – Reach influencers by targeting the hashtags they use

To promote this post, I ran Twitter ads targeting the official hashtag of the monthly SEM San Diego events, #SEMSD and one of the official hashtags used by SEER Interactive, #searchchurch. My intent was to capitalize on a gathering of industry professionals and influencers. Additionally, if your content features an influencer, as is the case with interviews, also target their following to amplify your reach. So, in this situation I knew Wil Reynolds, SEER employees and his fans would likely be at the event, which was why I targeted the keyword #searchchurch. Any other industry professionals Tweeting from the event would be using the prescribed event hashtag, #SEMSD. Here is the exact Tweet I promoted during this campaign:

The effective cost per engagement for my Twitter ad campaign was only $0.80. Being that there was around only 50 people at the June SEM San Diego event and this campaign saw 474 impressions and 23 engagements, you can assume that most event attendees saw my ads.

Social media advertising works beyond the long-term goal of building a following across networks, but also for content marketing efforts. The direct response may not result in leads or sales, but rather amplification from VIPs you otherwise would struggle to gain the attention of. Use multiple methods of promotion in addition to Twitter ads, then rinse and repeat, because unfortunately content marketing is not like the movie Field of Dreams, where you can “build it and they will come.” (Tweet this quote)